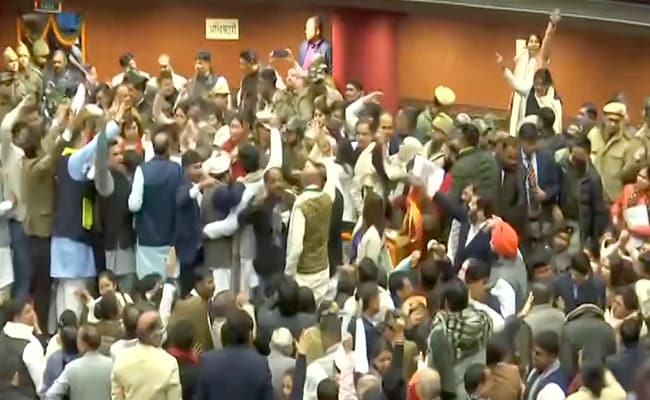 AAP and BJP workers raised slogans in the middle of the Civic Centre.

Chaos erupted at a meeting to elect Delhi’s mayor today as newly-elected councilors of the Aam Aadmi Party (AAP) and the BJP physically clashed and pushed each other, shouting slogans aimed at Prime Minister Narendra Modi and Arvind Kejriwal.

AAP and BJP workers were seen being pushed, beaten and even thrown to the ground during a meeting of the Municipal Corporation of Delhi (MCD), Delhi’s second largest decision-making body, at the Civic Centre.

Protests erupted over pro-tem Speaker Satya Sharma, appointed by Lt. Governor VK Saxena, swearing-in of nominated members of the house or aldermen ahead of the mayoral election.

As Mr Sharma invited Alderman Manoj Kumar to take the oath, AAP MLAs and councilors rushed to the center of the house chanting slogans.

AAP members said the elected councilors should have been sworn in before the nominated members. The AAP had earlier objected to the Lt Governor naming 10 nominees without consulting his government in Delhi.

The clash follows a series of skirmishes between the AAP and the lieutenant governor, who is the Centre’s representative in Delhi and reports to the Union Home Minister.

AAP has accused the lieutenant governor of trying to rig the mayoral election to help the BJP, which lost the December civic polls after three terms in power.

After naming the nominated members, Mr. Saxena appointed Satya Sharma, a BJP councilor, as pro-tem Speaker to preside over today’s election. AAP had recommended senior most councilor Mukesh Goyal for the post.

“It is tradition that the senior most member of the House is nominated as the pro tem speaker or presiding officer. But BJP is destroying all democratic traditions and institutions,” tweeted AAP MLA Saurabh Bharadwaj.

The BJP has claimed that it will win the mayoralty and AAP has no faith in its own councillors.

“Everything is being done according to the constitution. They are making excuses because they know they are morally defeated,” said BJP leader Manoj Tiwari.

Arvind Kejriwal’s party has fielded Shelly Oberoi as its mayoral candidate. In the face of an eleventh-hour volley, Rekha fielded Gupta after the BJP announced it would not contest the post. AAP’s back-up candidate is Ashu Thakur. The nominees for the post of Deputy Mayor are Aale Muhammad Iqbal and Jalaj Kumar of AAP and Kamal Bagri of BJP.

There are 250 elected councilors in MCD House. Seven Lok Sabha MPs from Delhi BJP and three Rajya Sabha members from AAP and 14 MLAs nominated by the Speaker of Delhi will also contest the mayoral polls.

The Congress consisting of nine councilors decided not to participate in the vote. AAP has accused BJP of collusion.

The AAP won 134 out of 250 wards in the first municipal elections held after constituency renewal and MCD merger last year. BJP is second with 104 seats.