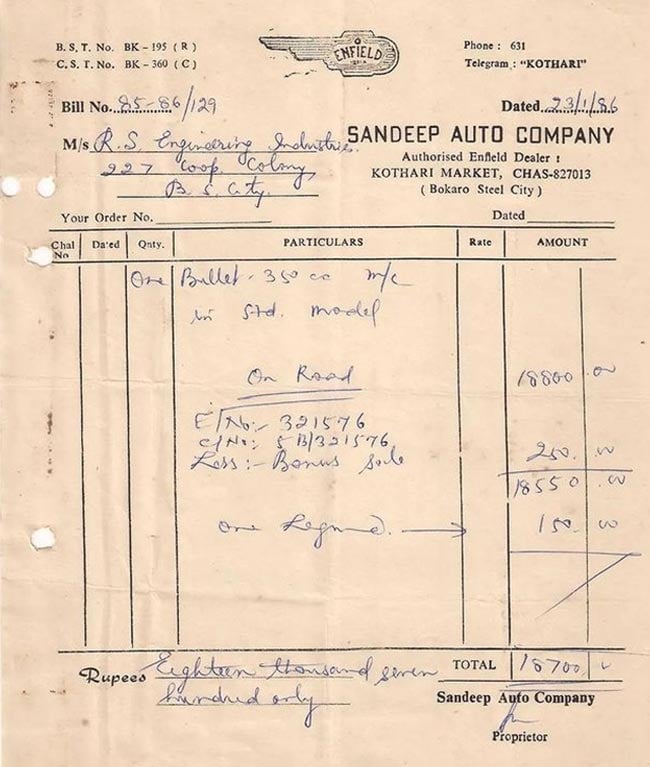 A bill dated January 23, 1986 has gone viral on the Internet and people are amazed.

People across the country have been buying the Royal Enfield Bullet 350 Bullet for decades, making it one of the most popular bikes in the country. It is the longest running model of the company, it owns a legendary bike. Being the most recognizable bike on the road, this bike has a distinct fan-base. The Royal Enfield Classic 350 has undergone some technical changes over the years, but the makers have tried to keep the look and feel intact.

As per their official website, the price of the ‘All New Classic 350’ starts at Rs 2.2 lakh (ex-showroom). But did you know that once the price of this bike was Rs 18,700? Although it may seem strange, we have proof. A bill dated January 23, 1986 has gone viral on the Internet and people are amazed. It was shared on Instagram by Bing Royal, a vintage bike enthusiast. The Rs 18,700 invoice for the Bullet is 36 years old and was issued by a dealer named Sandeep Auto Company in Bokaro, Jharkhand.

Back then, the bullet mentioned in the bill was simply known as the Enfield bullet. It was a reliable motorcycle used by the Indian Army mostly for patrolling the border areas.

“Many times RE doesn’t even give Rs 250 discount now,” added a second person.

“We bought a bullet in 1980 opposite Minerva cinema from dealer Ali Bhai Premji in Mumbai (then Bombay) Grant Road for Rs 10500/- yes ten thousand five hundred!!! ” commented another user.

After the car accident, Rishabh Pant underwent minor plastic surgery on his forehead