A 21-year-old student in Greater Noida was run over by a white Santro car on December 31 – hours before a 20-year-old was dragged under a car for 13 km in nearby Delhi. Sweety Kumari was walking with her friends near Greater Noida Modern School when a car hit them. Sweety is on life support, although her two friends suffered minor injuries.

He suffered severe head injuries and underwent brain surgery. The doctors said that he will have to undergo surgery on his leg. He has multiple fractures in both legs.

His treatment costs about two lakh rupees per day.

Sweety’s parents are farmers in Bihar and are unable to afford the medical expenses. So far, they have spent Rs 8 lakh, more than half of which has come through donations, her parents and friends said.

Students of GNOIT College, where she is a B-Tech final year student, started a donation campaign, and collected some money.

Police formed three teams, but the driver, who was apparently drunk, could not be traced.

There were no CCTV cameras on the stretch of road, due to which the police did not have the number of the vehicle.

To donate money for Sweetie’s treatment: 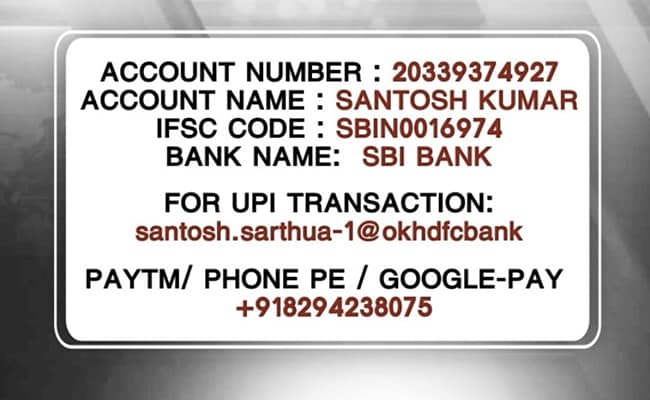 Note: This information is provided/published on a good faith basis without any commercial purpose. NDTV does not verify the authenticity of the claims made by the intended donor and we cannot guarantee that the donation given by a donor will be used for the purpose stated by the intended donor. You are requested to independently verify contact information and other details before donating. NDTV and/or its employees shall not be responsible for the same.